Ever since our 2016 launch with our 2013 Cabernet Sauvignon debut, Hertelendy Vineyards has been festooned with high ratings and reviews from the world’s most recognized critics, Master Sommeliers, and world competitions. Our debut Cabernet received 95 points from Robert Parker stating “it should merit serious attention,” setting the standard for Hertelendy, and it’s been onwards and upwards ever since. A couple years later, we received our highest marks yet (99 points!) and a couple 98 point scores from Robert Parker and Jeb Dunnuck. In fact, our Wine Club Exclusive Cabernet Franc was rated in the Top 40 Napa Valley Cabernet Francs of all time in Robert Parker’s 40+ year history! Also having received multiple Gold medals at Texsom (judged by Master Sommeliers and Masters of Wine), Double Gold & Best in Class at Sunset International Wine Competition, and Top 100 in International Wine Report, we are honored and humbled to have been well received so quickly by the wine community. Combining the highly positive reviews and incredibly low production (750 cases annually), this has created a cult following for us.

Nowadays, it’s incredibly surreal seeing a famous celebrity enjoying our wines (be sure to FOLLOW us) at an Oscar or Emmy’s party, or reading about Hertelendy in USA TODAY: “There isn’t a Hertelendy wine that hasn’t received praise; their bottles have scored 99 points from some of the world’s best critics. At Hertelendy Vineyards, there is no sacrifice to their craft, and in the realm of luxury wine, few can compete.” What will the future hold for Hertelendy Vineyards? Only time will tell… 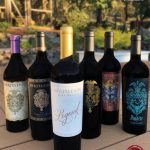 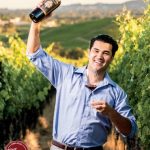 @GARYVEE’S MONTHLY WINE CLUB (May 2020)
“Hertelendy blows me away, one of the best wines, if not the best wine we’ve had.”
-Gary Vaynerchuk
2019
WINE SPECTATOR MAGAZINE (Nov 2019)
“Alphabetical Guide to California Merlot” Ranked #7 out of 102 wines
VERY NAPA VALLEY MAGAZINE (Fall 2019)
“A Napa Valley Rising Star Going For the Gold” article page 20-21.